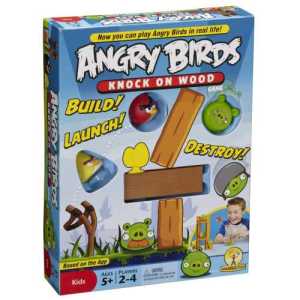 My son went to a seven year old’s birthday party this weekend, so of course we found ourselves shopping for a gift only hours before the event.

When he saw the Angry Birds board game, he just about lost his mind.

I took a look at the box, which screamed (in English, Spanish and French, unlike the image to the left) that players ‘can play Angry Birds in real life.’

Because apparently, holding an iPad on the way to grandma’s house and playing the Angry Birds app is not “real life.” ??!!! Is an app ‘faux life’?

If you’re not familiar with the Angry Birds phenomenon, I don’t mean to be nasty – but you live under a rock. To learn more about the app, go here.

In our house, this app is everywhere. We have three versions of the game, numerous sketches of Angry Birds in action (complete with “BOOM!” in my five year old’s printing). My son’s hockey team has named itself the Angry Birds.

It is indeed life imitating app.

(Update: upon seeing this post, a colleague sent me this story about children logging off, and unplugging in favour of ‘reverse technology‘.)

But then, I think about when my brother and I were kids, and the Smurfs (version 1.0) were all the rage.

He had smurf stuffed animals, smurf games, and for Hallowe’en… mom made him a smurf costume. He would rhyme off which Smurf he wanted to be (I was always Bernadette, the lone female in the Smurfdom).

And his hockey team, called themselves the Smurfs. All because of a television show.

‘TV is taking over our kids’ lives,’ folks probably cried, holding their heads in concern.

Is TV any more ‘real’ than an app? At least there’s interactivity with an app, I’d argue.

While it’s interesting to see that kids’ fixations have migrated from television shows to apps, I’m not sure we should get all bent out of shape about it.

That is, until my boys start launching things at our house.

Check out these ways to play Angry Birds in real life (the first video has nearly 1-million YouTube views):