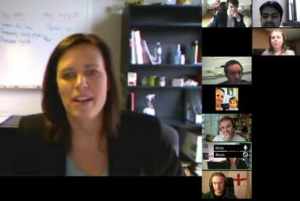 Today, we went way out of our comfort zone, and tried something (quite publicly) with no idea of its success.

We hung out on Google+, and talked about the platform and how news agencies should use it.

I was a little nervous, I’ll admit. I had no idea how it was going to go.

Within minutes, we (Online editor Roberta Pennington and I) got into a groove – it was an honest discussion about Google+ and how hangouts can be used.

(note: human error first time around – we thought we recorded the hangout, when in fact…. nada. I still consider the whole effort a success.)

Joseph Thornley said that he prefers using Google+ than conference calls or web seminars between his Toronto-Ottawa offices.

“You can see when people are listening, and their true reaction to things,” Thornley said.

Also in the hangout was Mike Downes, a Brit who has been using Google+ hangouts since they first appeared on the scene. (He’s the one with the St. George’s cross in the background).

After our 30-minute hangout, Mike congratulated us on our virgin (ugh, I did just write that) hangout, and offered this:

I was asked why I join their hangout. Simple answer, to discover those who want to make the news of tomorrow today Hangouts will help us do this..

Mike said he’s been banging his head against a wall (his words) trying to convince The Guardian and BBC that they need to start having a presence in Google, but they’re not listening.

I asked the group about Google+ compared to other sharing platforms. Obviously, they all thought Google+ was the superior platform. But the group also felt that Facebook, Twitter, Google+ and linked in all need to be used differently.

It was pretty much a kick in the teeth to Facebook.

“Facebook is where you post the trivial things that happen in life, and cat videos,” someone commented. Others laughed at that.

Thornley asked during the hangout about the Ottawa Citizen’s plans for various social media platforms.

Time to be brutally honest – we need help with that. I confessed that I was hoping that by hosting this hangout – and more like it – that people would tell us what we should do, what they wanted the Citizen to be.

What I heard was that we needed to let the public in.  Adrian J. Ebsary suggested we use our site as more of an agregator, linking out to folks and giving them credit for their content, and involve our audience as we work on stories.

Thornley said we should use Google+ hangouts for niche discussions. His thought: our jazz blogger, Peter Hum, could host a hangout with folks who just wanted to talk jazz.

After our hangout, Paul Synnott in Windsor put it this way:

I think many people are looking for more community/local in their news. That’s why many hyperlocal news sites are doing well. I look to papers like the Windsor Star for my local news, events and entertainment. If I’m looking for sports, finance etc, I tend to go a place like the Financial Post or TSN to get it directly from the source. Yet, most newspapers still only dedicate 2 or 3 pages to local new and the remainder is wire fed.

How better to be local than to hangout with the locals and learn from them?

I don’t want to sound all Pollyanna here, but this felt like a step that was very much in the right direction.

Will there be more hangouts? You bet.

(Image taken from a +Mike Downes screengrab. Thanks Mike)

3 thoughts on “We tried a Google+ hangout and it didn’t suck (in fact, it was awesome)”