While social media platforms have vastly increased the speed by which a reader can submit content, an ONA ethics panel agreed that traditional verification of sources is more important than ever.

During a panel of the Ethics the Community Newsroom, Jennifer Preston of the New York Times pointed out that her paper has been publishing user-generated content for centuries – in the form of letters to the editor from readers.

User-generated content (UGC) is not new, but the need for verification is more important than ever before, Preston said.

Fergus Bell, Senior Producer and Digital Newsgatherer for the Associated Press in London said that when he finds content he’d like to put out on the AP wire, he has a system of sourcing and verification that includes:

Here’s how it looked:

Bell said when crowd sourcing material from conflict areas such as Syria, the AP makes sure that the source understands how their material is going to be used, and the reach of the Associated Press.

What about telling them it’s dangerous? An audience member asked Bell.

“We can only tell them to be safe, but we can’t and shouldn’t tell them to stop. I think we have to make sure they understand the risks,” Bell said.

All members of the panel said verification was extremely necessary in places like Syria, where the news organizations don’t have any reporters on the ground and have to trust dispatches (Preston called them ‘shares’) on social media.

“What I’ve learned is most important is that if you can’t verify it, it’s not a story,” she said.

While it seems a lengthy process, Preston showed an American example that proved these steps are necessary.

She pointed to the story of a Feb. 2012 shooting in Chardon, Ohio, when a student entered the school cafeteria and shot six students. Three students were killed, a fourth was paralyzed.

T.J. Lane was identified as the alleged shooter soon after the incident.  In lightning response, this image was pulled from a Facebook page and many news organizations posted this as an image of Lane. (Indeed a google search for ‘T.J. Lane’ still retrieves this photo): 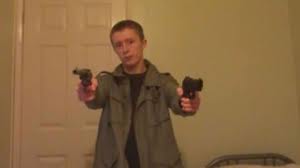 It turned out, this wasn’t Lane.

Here’s an Associated Press photo of T.J. Lane as he appeared in court in September: 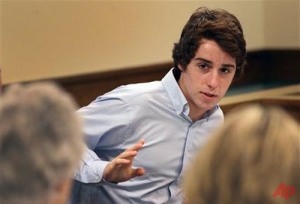 Amanda Michel, Open Editor at the Guardian’s New York office, said the flipside for news organizations wanting to get it right is they have to treat their communities right.

Michel pointed out that 1/3 of The Guardian’s 72-million readers are in the U.S., a fact the news organization doesn’t take lightly.

She outlined some important steps that go a long way to building a relationship with a community:

Preston pointed out that the New York Times also takes comments seriously – it has a staff that has invested a lot of time with comments, moderating and identifying trusted members of the community who don’t have to be moderated as other commenters on the site.