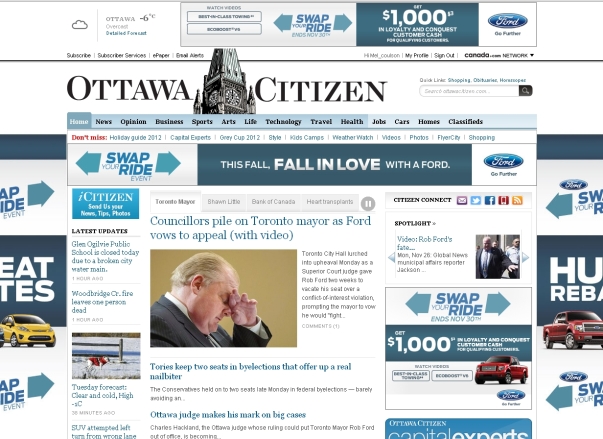 When working on newspapers, layout and design folks keep an eye out (or at least try to) for poor story placement next to advertisements.

Hypothetical:  Woe is the advertising salesman who sees a half-page ad for his client, Hypothetical Air, next to a story on a major air crash.

(In fact, more often than not, when there is a plane crash, airlines will call to remove their ads from publication the following day.)

This can happen online, as you see in the above photo. A nationwide, chainwide web takeover ad for Ford Canada, wrapped around the Ottawa Citizen’s website. Unfortunately, high up on  the same website was a story about Toronto Mayor Rob Ford, who was given two weeks to vacate his seat over a conflict-of-interest violation.

I was able to grab this screengrab before we moved the Ford story.  Before you cry foul over editorial content being sidelined for advertising, let me say this in our defence: The story was a day old, and could have easily been bumped out of our rotator for news value.

Peter Simpson, the Citizen’s Arts Editor-at-Large, saw this post and recalled his ‘mugshot’ which was unfortunately juxtaposed next to a not-so-great headline. Here’s the image:

Thanks to Peter, who is and never has been (to my knowledge) a robbery suspect, for this photo.