Judging by the set up, the Winnipeg Free Press News Cafe looked ready for a televised interview with former Canwest CEO Leonard Asper.

But as Free Press reporter Geoff Kirbyson began asking the local celebrity about the demise of his father’s decades-old media company, it became clear that this was no regular studio interview.

Two men in the back chatted loudly, shooting the breeze over a cup of coffee.

This is, after all, a news cafe.

When Kirbyson asked Asper if his father might be disappointed in how he handled the company, another patron said loudly: “what a stupid question.”

This is what makes the News Cafe such a different, wonderful beast.

Kirbyson was interviewing Asper as he would have for a story in his news organization’s website and paper, but the cafe environment created a different environment, allowing for the community to watch a journalist in action and take part in the discourse.

The Asper interview is an example of what Dan Lett, the Free Press’ political columnist and content co-ordinator for the New Cafe lovingly calls “a random act of journalism.”

“I usually start events like this by saying ‘How many of you came for something to eat? Well, you’re in luck – you’re getting dinner, and a show!’,” Lett said in an interview.

The concept for the Free Press’ News Cafe was conceived in the fall of 2010. Originally the plan was for a small satellite newsroom in a cafe setting.

Web video resources were relocated, the Cafe opened in March 2011.

“It was supposed to be a kind of casual thing where people could come see journalists at work,” Lett explained.

“The thing is, there is very little that journalists do that is dynamic and interesting to watch. And not everyone can do journalism in a busy restaurant. It’s difficult to carry on phone interviews. And let’s be honest, it’s not all that entertaining,” he said.

There began a series of experiments to see what would draw people into the cafe. Lett and his team held online open forums with journalists, which morphed into panels and symposia.

Luckily, 2011 was a big election year with federal, provincial and local government votes. The News Cafe started doing a lot of programming around elections.

“There are some people who think that elections are an event, with nachos and beer,” Lett said.

On the  night of the U.S. election in November, there were more than 100 people at the News Cafe, most in the crowd were university and college students.

“The hard part is convincing people in the industry that there’s a need to promote the brand. We’ve never had to do that before,” Lett said.

One of the beautiful things about the cafe is not only that it allows the public to see how journalists work, it gives them access to politicians, celebrities, artists and other people they might not ever have an opportunity to meet.

As an example, he pointed to an interview he did at the News Cafe with Federal Finance Minister Jim Flaherty. Lett was struck by how silent the cafe had fallen, as the audience listened to what Flaherty had to say. He commented on it during the interview.

“Well they have to listen, or I’ll just raise their taxes,” Flaherty quipped.

That kind of comment would never have been made in a more formal setting.

“The simple beauty of this operation is that it works best when it’s a conversation. It’s supposed to be interesting and engaging,” explained Tyler Walsh, the News Cafe’s Multimedia Editor.

It’s also a platform that allows for more playfulness.

One the News Cafe’s most popular items online was an interview with a burlesque dancer who was raising funds for a women’s shelter. (“She remained somewhat clothed,” Lett added)

It’s a subject that probably wouldn’t have found itself in the pages of the Free Press, Lett said.

Other media are welcome in the Cafe, the NPR has used the cafe to do news hits, and local and U.S. TV stations are welcome to use the space. (Though Lett suspects that reporters and photographers from the Winnipeg Sun aren’t allowed by policy to darken the cafe’s door.)

This can blur the lines with traditional competitors. The day after the Flaherty interview, Lett and the finance minister were splashed across the cover of the Metro. 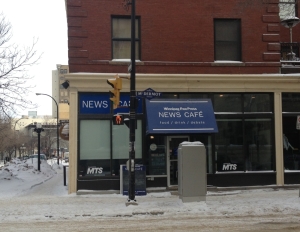 The News Cafe is located in Winnipeg’s historic west exchange district downtown, home to a large concentration of Chicago-style architecture – and far from the industrial ‘Inkster Park’ that is home to the Winnipeg Free Press.

While it’s still an emerging area, it was once known as newspaper row.

Being a news hub isn’t something new for the space. Recently, Lett discovered that the cafe is located in what was once the dining room and bar of the Mariaggi Hotel. During the Winnipeg General Strike, reporters filed from the same spot where Lett and his team performs its random acts of journalism.

News still breaks at the building. Reporters write stories off of their interviews.

“There were [Manitoba Legislature] reporters watching the live feed, tweeting it and filing live stories online,” Lett said. “And when the live feed ended, Tyler took out the highlights and it became an instant package.”

How the cafe is staffed

When there’s a big newsmaker coming to the cafe,  Walsh acts as show producer, and edits video for replay. He works full-time at the News Cafe, with photographer and videographer Melissa Tait.

Walsh and Tait are Winnipeg Free employees and members of its guild, they just work out of the News Cafe, Lett explained.

(Lett acts as content co-ordinator, but has a laptop and travels.  While he works at the cafe, he will also write columns and blog from home and office.)

The cafe actually makes reporting easier, Lett explained, because “people come to us. The problem with digital multimedia is that it’s a lot of work to get all the stuff out there. We can command the content here.”

The News Cafe is not a cost centre, Lett said, and because it makes things easier logistically, it actually saves money.

The cost to run the News Cafe is minimal, thanks to some strategic partnerships.

The News Cafe was set up through a leasehold improvement agreement. The Free Press gutted and rebuilt the cafe, and moved in all the equipment it needed to webcast.  It doesn’t pay rent.

The News Cafe has a sponsorship agreement with Manitoba Telecom (Signage on the windows indicates the News Cafe is ‘Powered by MTS’), which means it has no phone, internet, or television costs.

The restaurant is a separate partnership, which is independently managed outside of the Free Press, which exists formally as a non-equity shareholder. Any profits from coffee, breakfasts, soups and sandwiches (a pretty tasty menu, fwiw) go to the restaurateur.

While the space wouldn’t feel the same without food and beverage there, it doesn’t make sense for the news organization to try to make money off a restaurant, Lett said.

“Newspapers don’t know how to run restaurants,” Lett said, and took a bite of his breakfast.

“The Free Press is not trying to make money selling sandwiches and soup.

Does it make money?

While the news cafe is primarily for audience engagement, Lett said it has had held a handful of events and projects that allowed them to create advertising partnerships.

Investment firm PI Financial partnered with the News Cafe to hold a series of financial workshops on investment strategy. When Facebook had its IPO the group came in to talk about how digital companies are trying to monetize.

“What a PI Financial event does when they do the event, they buy advertising online and in print to support the event, and in return we’re connecting them to thousands of people,” Lett said.

There was a special program with the city’s fringe festival, which provided a small return. 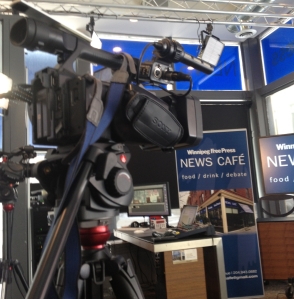 Lett said his goal for the News Cafe is to get people engaged, to curate and convene public debate.

“There’s a compelling argument that it’s all connected,” Lett said.

He hopes the News Cafe can help turn that around, that it and the public media project the Community News Commons will get people to care more about the issues in their community.

“We want the debate, we want [people] to be concerned about politics, and we don’t want people to forget it’s important to consume news.”

The News Cafe is opening up the debate to new audiences, people who might not pick up a paper, Lett added.

“We can do things here.”