UPDATE: Further down this post, you will read how OpenFile’s CEO Wilf Dinnick says in a note to freelancers that a J-Source article about his organization ceasing operations was “incorrect on many counts.” I asked the writer of this article, Kelly Toughill, Director of the School of Journalism at University of King’s College in Halifax about this. She responded:

Wilf has not asked for a correction or clarification from me or from anyone at J-Source. Nor has Wilf posted any comments on the J-Source site, which he is welcome to do.  Wilf did contact me after the story ran. I offered to clarify anything he felt was misconstrued, but he declined and explicitly stated that he did not want a correction or a follow. Everything in the original story is true to the best of my knowledge; most of it is based on my original interview with Wilf and our email exchanges.

Wilf Dinnick deserves credit for tackling the key problem of our era: the collapse of the business model for public-service journalism. He poured his heart and soul into a bold experiment in a time of excruciating uncertainty. Lessons learned from OpenFile will be at least as important as the viability of the model itself.

Some of OpenFile‘s former freelancers have written an open letter to Wilf Dinnick, the community news organization’s founder and head.

OpenFile, a network of local news site that wrote stories based on community suggestions, ceased operations in late September.

In a tumblr they plan to update, they wrote openly to Dinnick:

As freelancers who put many hours of work into OpenFile’s growth over the past few years, we were all disappointed to hear in late September that it would cease publishing. Freelance journalism isn’t an easy business, and it became a bit tougher when one of the most encouraging prospects for young journalists shut down.

When the organization closed, many of OpenFile’s freelancers were still waiting to be paid. Some of us had been waiting for months. In late October, several of us emailed company founder Wilf Dinnick, asking when we would be paid. We received no response.

A week later, Dinnick spoke with J-Source. His comments were hardly reassuring. In an email sent to some freelancers on Oct. 2 Dinnick had promised payment soon, at the end of a period of “restructuring.” But he then told J-Source that auditors had physically removed the company’s books and frozen the accounts.

In the interview, Dinnick said that most bills were for only $100 or $200, and only 10 freelancers were owed more than $500.
We wonder why the company would decide to drag freelancers with such small invoices along, for so long, with so little in the way of direction.
Many of the freelancers signing this letter are owed over $1,000. Budgeting without knowing how much money we’ll have in our pockets hasn’t been easy.
Dinnick also implied that paying freelancer within 30 days was somehow a cause of OpenFile’s financial woes. Payment within 30 days was certainly not the norm, and most of us grew accustomed to waiting two or three times that long.

I contacted Dinnick about the open letter,  who called so much of the coverage about OpenFile ‘misleading’, and said he really didn’t need any more confusion.
END_OF_DOCUMENT_TOKEN_TO_BE_REPLACED 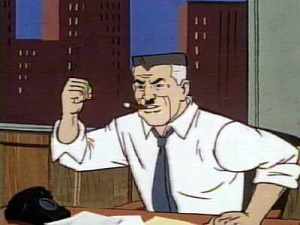 Okay, so not all editors are like J. Jonah Jameson, the Spiderman-hating,  cigar-touting, shouting boss constantly looking for the latest spidey scoop.

Lately, I’ve noticed that a few news organizations have decided that not all editors should be in the office, like Mr. Jameson at The Daily Bugle. (And that’s as far as I’ll be taking this Peter Parker analogy…)

The Open Newsroom and community involvement is one of the biggest parts of the digital news evolution, and it’s fascinating to think where this may lead.

Of course there’s Canadian startup Openfile, which is a completely community-driven enterprise, with stories suggested by readers. It was heralded when it launched in May of 2010 as a whole new way of thinking about news.

And let’s be honest, we have to change the way we think about news, and we have to involve our community.

We’re no longer just reporting stories, we’re sharing them. And by getting our community involved in the process, they become a part of the organization.